Eon Kid is based in a world that was once ruled by robots, however a long time ago a great hero used an item called the “Fist of Eon” to destroy their leader. Now the robots and humans have made peace, mostly, but the world is still in disarray. Some new villains are on the rise along with a new villainous plot. When Marty finds the Fist of Eon, as well as the task of saving his new friend Ally, he discovers his part to play in resolving this quickly building threat.

While the basic premise and storyline of this cartoon is fairly interesting and solid. I found that the problem I had with this show was the way in which it was presented. Not only was the animation amateurish in appearance and the voice acting lacking, but there were many moments added into the show that may have been designed for comic relief, but that I found were quite tedious. It may be okay for young children, however for the regular person, some of the humour is a bit dry. 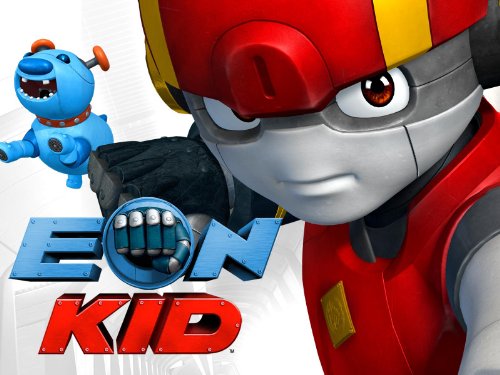 One of the worst flaws I found was with the synchronization. The actor’s voices weren’t always even synchronised with the flaps. (Flaps are a way of referring to the mouth movements of the characters often used by those in the voice acting business.)

The characters were your average cookie cutter ones, I found. Although this is usually to be expected in a children’s cartoon, I still found it to be quite a shame.

I wouldn’t recommend this cartoon, it was mediocre at best.

This time I decided to draw Renji from Bleach. I think I’ve gotten better.

It’s still a little rough, however it’s a huge improvement.

I’ve shown the basic sketch and the coloured in version.

Renji in colour by TheAnimatedSky on DeviantArt

I decided to try making art digitally. As you can see, my first attempt wasn’t very good. I didn’t really have a character in mind when I made it, which was probably a big mistake.

I was also playing around a bit with software to see what I could do.

I realised after I made it, that it looked a bit like one of those eyeball youkai from anime, if they were wearing a festival mask that looked like a human face… I may need more practice/focus.

First attempt at digital art by TheAnimatedSky on DeviantArt

The world is ending, Hibiki and his friends must not only fight against the looming creatures threatening humanity. They must also decide what they’re fighting for. This is actually based on a video game, and is in my opinion one of the best adaptations I have ever seen.

I am a huge fan of this anime, it’s the first anime I actually watched, and is the reason why I’m such a fan of the medium in general.

The storyline is fairly good. It doesn’t have the best one ever written, but it’s pretty solid and the ending is very well done. The action scenes are epic. One of the best things about this show is the group of five main characters. Hibiki, Daichi, Nitta, Alcor and Yamato. Their backstories, personalities and the way in which they all interact is what makes this show truly special in my opinion.

This is one of the few reviews in which I’m actually going to mention the ending theme. This ending theme is one of the best I’ve ever seen. It is the same sequence each time, where you see all the characters from the show walking casually, scattered around a regular patch of cityscape both before and after the event. However, whenever a character dies in the show they disappear from the ending. The final ending is the most important one to watch. I won’t spoil it though!

I highly recommend that you watch this series. (I may be a little biased though, even though I tried to be as subjective as possible.)

This was simply a miracle, in my review of The Melancholy of Haruhi Suzumiya I mentioned that I wished that they would’ve spent more time focusing on Nagato. Well, I found this and was really pleased.

After watching, I did really enjoy it, however I am a little disappointed by how far from the original Yuki the main character was. They were a different person completely.

The art style was also drastically different, which didn’t bother me much.

However, I still thought the story and characters were really well written and fun to watch despite deviations from the original.

I look forward to seeing the rest of this show.

A lot of reviewers have mentioned that they were disappointed with the “boring” slice of life appearance of this show, however I predict that supernatural elements will turn up at some point. I just can’t believe that it will stay the way it is.

To me it feels like the writer has been trying to make it seem like an overly normal slice of life for a reason. If the supernatural elements appear as I think they will, my extremely high opinion of this show will climb even higher. If not I’ll be somewhat disappointed.

I loved this movie, I couldn’t stand the series but I really love the movie!

The Disappearance of Haruhi Suzumiya depicts a situation where Kyon wakes up to find everything and everyone he knows, missing or changed in some way. There is more to it, but I don’t want to spoil it.

Firstly, I loved the basic principal, such a creative and thoughtful idea as this is very unique.  Secondly I was quite pleased to see all the ways in which it tied in to the series, I got a kick out of every one. Such a thing shows careful planning and forethought which really makes me respect the writer.

Mostly the characters were pretty similar to what they were in the show, and I mostly have the same opinions of them.

I noticed that the art style was different from the series, which was a little unfortunate. It wasn’t too bad, but I would have preferred it to keep the same art style, or at least for it to have only changed when the continuity between the show and movie is altered.

It was quite touching, and the truth behind it was a little predictable, but still had just as great an effect.

Whether you loved The Melancholy of Haruhi Suzumiya, or hated it, I highly recommend you watch this movie.

I quite enjoyed seeing the basic direction of this show.

I liked the way the characters had progressed and especially the way Naruto was still the same person (albeit slightly more mature). I would have been really disappointed if they had radically changed his character.

However I felt that the progression of the actual storyline was much too slow. I still don’t understand how the scene at the very beginning fits into the current timeline. While it will probably be explained later, it was still fairly off-putting.

Despite this I will probably continue to watch Naruto Shippuden.

This is a truly stunning anime, with an intriguing, but tear jerking storyline (towards the end). It focuses on Kujo, who finds a girl called Victorique on the top floor of his school’s library. He befriends her, and then finds himself caught up in an array of different mysteries, from murder to theft. Victorique solves them, however, the most important mystery is the one that’s surrounded her all her life. Everything depends on Kujo, and if he can rescue her from her fate.

I really enjoyed watching this show, it’s a masterpiece. All of the mysteries serve a purpose within the overall plot. They work very well with humorous character traits, using it to distract and lessen the effects of the tragedy that weaves its way into the story. However, this does begin to stop as the series reaches its end, as with most shows with emotional crescendos. (Black Butler for example.) 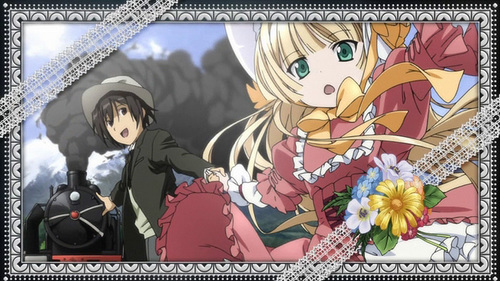 This series has some really interesting characters, the main characters were very well developed and very likeable, both with extraordinarily detailed pasts. The side characters were all extremely quirky, although I thought that they didn’t spend quite enough time on some of them. Some of them became a bit confusing and hard to keep track of towards the end of the show. The last episode, however, resolved it all very well.

In conclusion, this is an extraordinarily well written show, which I recommend to anyone who doesn’t mind a bit of tragedy.

So, we have a club. It’s still pretty small and there was only one response to this club discussion, but I still thought it was worth posting. I hope you enjoy.

Me ~ Naruto won the poll by one vote! So share your thoughts on Naruto here. Anyone is welcome to share. (although it’d be really nice if you’d join the club  )
You can talk about Naruto and Naruto Shippuden, up to any point. Spoilers are allowed

I think Naruto has been steadily getting more enjoyable as it proceeds. While the original show has its charms, Naruto Shippuden has surpassed it. I also found that the inclusion of Sai, over Sasuke was a relief. I thought Sasuke was annoying at the start and he’s still annoying, but at least he’s not a main character. 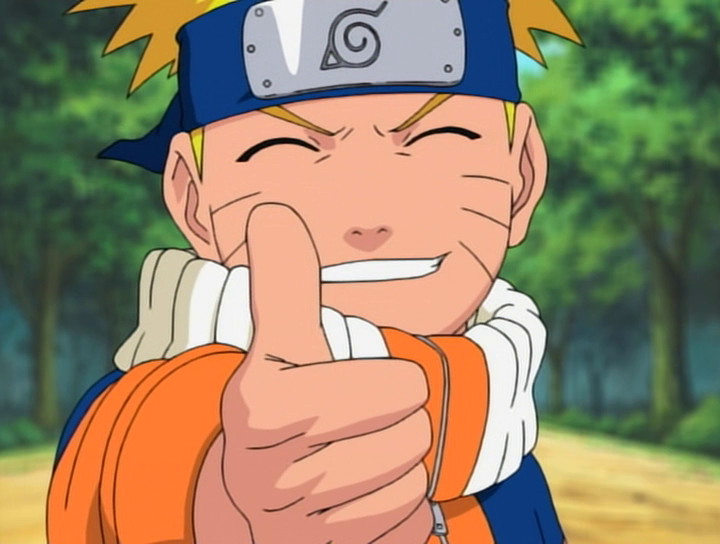 At least, in my opinion. Share yours below.
(I may feature your comments on my blog of the same name as the club, but I’ll credit them to your usernames)

Nib ~ I haven’t kept up with the show that much but i’ve read all the manga and i love it. The progression of the stories and how they intertwine and come together at the end was the best way to end the series.

Me ~ Thanks for your thoughts Nib!

I’m not up to that point yet, but I’m glad to hear you enjoyed it.

When I was first starting to watch anime, I actually heard about Naruto Shippuden before I heard about Naruto. I decided to give it a try, completely unaware that it was a “Sequel Show”. What I remember from when I started on this show was feeling very confused about what was actually happening. I waited for what seemed like forever to see if I would work out what was going on, but I still had no clue so I gave up on it for the time being.

Later on I found out that I had only waited for three minutes before I gave up! I was an impatient kid, wasn’t I?

However, this goes to show that it is much better to watch Naruto Shippuden after watching Naruto.

(Also, it highlights the importance of researching shows before watching them!)

I later watched Naruto and proceeded to try Naruto Shippuden again. To find out what I thought of it, keeping checking this blog for updates.