Do you remember the topic I posted a while back called “Devil Survivor 2 the Animation Prediction”? If you’ve seen the show and read that post you’ll probably find this funny too! Check out this link. http://www.amiami.com/top/detail/detail?gcode=CGD2-57805 They make a bunch of other kinds related to the same series too. Oh the irony!

Recently I came across a copy of OtakuUSA magazine in a local newsagent, which is unusual because I’m not in the USA and I’ve never seen a newsagent here sell any anime magazines before. I made sure to pick up a copy so I could check it out. There were a lot of reviews of anime, manga, games and a few other miscellaneous things. It was pretty funny that they named the manga review section the Night Parade of a Hundred Manga! They also had some news, letters from readers and my favourite part, manga samples!

Also an update on the club’s anime of the month discussions, I would’ve posted the next one but there was a little mixup and the topic got deleted twice. So I’m not sure when or if I’ll post more of these. I’ll try to, but I can’t guarantee anything.

This was a really interesting series, in the aspect that it followed along the same questions of morality that Code Geass and Death Note did. Basically they ask the question, “is it okay to kill criminals, and what does that make the person that kills the criminal.” The perspective of this show, however, is completely unlike the other two I mentioned in many key ways. The first of these being that it is a much lighter show in my opinion, and you see all this from the point of view of the “regular” girl in the centre of all the action.

The characters were all fairly well portrayed, they did a spectacularly good job of portraying Ogami in just the right way for a character in his position. I wanted to see much more of Yuuki’s backstory, because he was one of the most interesting ones. I was particularly impressed with Heike’s role, they completely threw me off with some pretty clever writing. I didn’t predict anything that this character did after the first major move he made.

I wasn’t a fan, however, of the way Hitomi was portrayed. His speech and actions all seemed contradictory to those moments later, and all of the other characters just seemed to respond accordingly to his current persona. I didn’t feel that he was given an appropriate reasoning for this kind of erratic behaviour and it was irritating that the other characters went along with it. I also thought he looked an awful lot like Ogami, and was just waiting for that to come into play at some point, however it never did.

I enjoyed the action elements, and seeing all of their supernatural powers come into play, however.

So in general I did like this show, however there are some aspects that could have been markedly improved.

In episode 40 you see Sanji fight Kuroobi the fish man underwater. Sanji defeats Kuroobi by blowing air directly into his gills and suffocating him. However fish actually breathe by taking water in through their mouths and expelling it through their gills. So in order for Sanji’s plan to work he would have had to blow the air into his mouth and thusly force it through Kuroobi’s gills. Air being blown directly into a fish’s gills would probably still not be very healthy for it, but I think it would just be mildly irritating and the air would most likely be expelled almost immediately as the fish continues to breathe. I highly doubt that it would have caused enough damage for Sanji to gain the upper hand.

I am an avid aquarist who has kept fish since I was 11, so when I saw this scene I immediately knew that something was wrong. I did some research to make absolutely sure that I was right, however if you do see a flaw in my logic or facts please let me know!

I know that this show has fantasy elements and shouldn’t always be taken too seriously, but I just thought I should let you guys know.

This anime seems to be about a mix of characters from or associated with 1001 Arabian Nights. Aladdin, Alibaba, Sinbad and Ja’far for example. The characters from this show don’t really seem to play exactly the same roles as the ones you might know, however. For example, Ja’far works under Sinbad and fights on the side of good.

In the story, Aladdin is a magi, who is someone with special powers and the ability to choose the next king. He appears near Alibaba and turns his life upside down. They decide to go on an adventure, however there are pressing matters awaiting them at every turn. Dungeon capturing is a prominent theme in this show. These are places where Djinn reside. (Think genies) These Djinn can be summoned with special objects and will help their summoner fight.

I wasn’t a huge fan of this show, I don’t really have a reason why, but I personally didn’t enjoy it much. I didn’t like the way the story twisted as it progressed. The characters were interesting and fairly well written, the idea was novel. The show did feel cluttered, however, like they were trying to squeeze too many elements into it.

In the beginning, it was far too messy in my opinion. I also wish that Alibaba’s backstory had been covered earlier on. If the flashbacks had been shown before his past started to affect the story, it may have been far superior (in my opinion).

I found that it was more enjoyable as it reached its conclusion, I started to settle into the pacing as it began to reach its conclusion.

A paper called the MX held a competition where you could take a photo of the front cover (a poster for Avengers Age of Ultron) in a creative way to win a prize. It’s a bit late to send it in, but I thought I’d post my entry here, ’cause I thought it was pretty cool looking.

This anime is extremely dark, so those who don’t like that should stay far away from it. It is about a boy who is framed for the murders of his entire class, and given the death sentence in a new prison. In this prison the prisoners have to face almost certain death each day. However, he has gained an unusual power.

One thing about the show that was strange, and I’m not sure if this is only the case on Animelab or not, but some of the colours seemed to bleed across the screen. It may have had a purpose, but it wasn’t clear to me. (Animelab is owned by Madman entertainment and is a legitimate legal streaming site, so it probably shouldn’t have those sorts of problems.)

One of the best features of this anime were the characters, almost all of them were likeable and interesting. I personally didn’t like Hummingbird and the Undertakers, however the rest were all fascinating to watch. I really enjoyed seeing Shiro’s attitude to everything she encountered, and her relationship with Ganta. I think that it really took the show up a level. I also really liked Crow’s character. This anime creates an effect where you grow to like characters on different sides, which will willingly fight each other. I have never seen this effect to such a degree in an anime before.

I felt that all the different situations the main character faced passed by too quickly. Especially considering that these situations contained many unique, detailed and interesting concepts. It was almost as if it got bored and forgot about things.

Personally I wasn’t bothered much by the dark nature of the show, however I did feel that some aspects were unnecessary, while others should have drawn more focus. This show was trying to be dark, so I’m not going to complain that they did what they set out to do, though.

This show has a very open ending. In fact, I would say that it doesn’t really end. This wasn’t a big problem, but I’m a little disappointed to not see it wrap up completely. That’s a little strange, since I usually prefer open endings, however I would say that the style of this show certainly contributes to this.

So watch this if you don’t mind dark shows, and I would highly recommend it to those who watch anime for the characters.

This anime is about the literature club, who all gain super powers. They don’t have many enemies, so they mostly end up trying to get to know their powers.

The plot was fascinating, it didn’t go quite the way I expected, but I mostly enjoyed it nevertheless.

They have a large main group of characters, with a varied range. There wasn’t really anything that stood out apart from Andou, though.

Watching all the characters progress was fairly interesting, although at some points it seemed a little off. 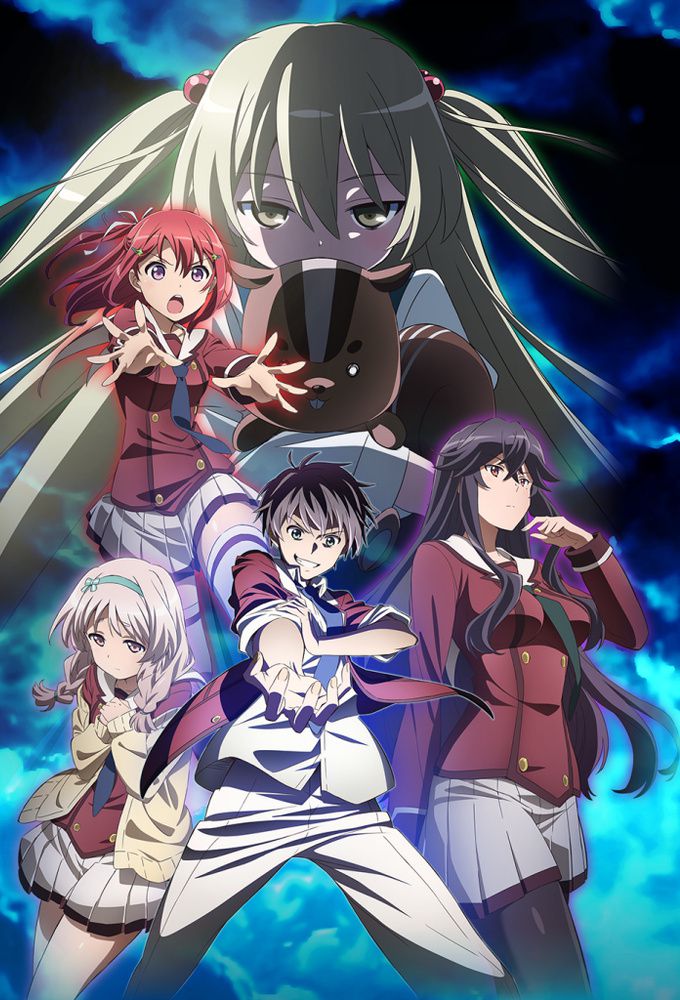 I loved all their references to chunnibyou sickness, or middle school sickness. The main character Andou had this and it made him eager to discover things that weren’t real. For a main character, this is a very refreshing trait. Far too often are main characters wearied by their powers, so to see a main character who’s actually grateful is remarkable. I also think his chuunibyou is quite relatable, for many people.

This was a show I couldn’t look away from. In my opinion, one of the signs of a great show is being able to marathon it, and this definitely fits in that category.

Not to say that this show doesn’t have flaws, the storyline isn’t perfect and in my opinion focuses too much on unrelated topics, and the other characters aren’t exactly an outstanding group, however I really enjoyed watching this anime. So I’d say give it a try if you think you’ll enjoy it.

After a lot of research before watching this show, I found out that it has no relation to Gunslinger Girls or Infinite Stratos. This was very helpful for me, because I haven’t watched either of them, not yet at least.

I was really excited to watch this show, the image I saw beforehand looked… awesome to be frank. I was also really excited because it was based on a video game in the same way of Devil Survivor 2 the Animation was. Yet I was a little disappointed with this series. The story all changed so quickly without giving you a chance to get to know and become invested in the characters.

The relationships between the characters were ones that have been blatantly overused in so many different shows already, that they’ve been beaten half to death!

For a show based around sci-fi and mystery, it was all far too clear.