As much as we all love the anime My Little Monster, there are no doubts that it has some painfully obvious flaws for an anime of the romance genre.

I would say that it fits into the slice of life/comedy/friendship genres, and that it is a story about two people who don’t understand love.

For starters, Shizuku is a girl with no desire to interact socially with anyone else for any reasons. She is obsessed with study and doesn’t seem to have any hobbies or friends. Her family background, however, seems extraordinarily laid back and also seems the sort to place very little emphasis on grades. Self-motivation is one thing, but hers borders on a syndrome. To not have even a remote interest in anything else, seems to me like a tremendous character flaw. 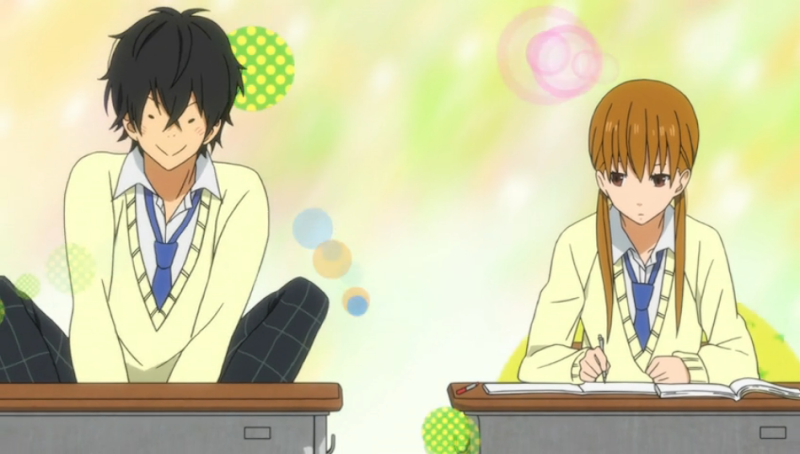 And Haru is a boy who is starved for attention and found himself easily taken advantage of by anyone who pretended to be his friends. It’s clear his family situation isn’t all too good, and it took him mere moments to “fall in love” with Shizuku, before retracting that statement.

The fact is that anyone who would still call this show a romance should remember the scene early on when the two main characters barely know each other and Haru threatens Shizuku with rape, perhaps not with serious intentions, however a remark like that wouldn’t ordinarily signal the start of a true work of the romance genre. Though, it does fit the image of a somewhat gritty slice of life show that struggles with complex issues. From the first few episodes alone, one could even go as far as to class the show in the psychological genre.

As this anime continues, the main characters develop friendships and become closer to one another, slowly expanding and enriching their social lives as Shizuku learns the importance in that while Haru learns what it means to truly care about someone.

I greatly enjoyed the anime My Little Monster, however it is not in any way a romance anime.