Natsume Yuujinchou is telling of the adventures of Natsume, a young man who can see spirits. A long time ago his grandmother, who had the same ability, defeated spirits and collected their names in a book called the “Book of Friends”. Any spirits whose names were written in this book had no choice but to serve whoever held it in their possession. When Natsume finds this book spirits try to attack him, some to get their names back and some to gain the power of the Book of Friends. He decides to try to release every spirit (excluding the evil ones) from the Book of Friends with the help of his bodyguard, Nyanko Sensei, a spirit who takes the form of a cat.

The storyline was very well done. It was quite basic, but it allowed for a good number of episodes of varying styles and purposes. The majority of the characters were lively and interesting. While Natsume himself couldn’t be faulted, I still found my attention and favour was mostly drawn to Nyanko Sensei. After all this was what he was created to do. He was certainly the most entertaining character in this show and by far my favourite. I do wonder if my age could have affected my opinion of this character, however.

I would quite like to hear the opinions of all my readers to see if you felt the same way. So comment below and tell me what you thought of Nyanko Sensei.

The endless eight is a series of eight episodes that is caught in a time loop. Each episode is the same two weeks repeating over and over with only very subtle and minor differences.

Do I hate the endless eight?

Many people hate the endless eight with a passion, and while it is quite annoying, I actually don’t hate it. My reasons being that it is actually a very unique moment in anime history, and while there may be other anime that have a similar theme, there will still never be one quite like it. 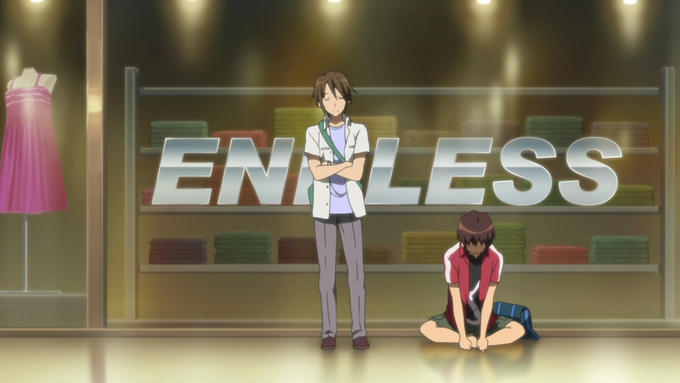 The trick to watching the endless eight and not being driven crazy!

I broke it up into two groups of four episodes each night, then while I watched them I surfed the net and played some light games online. These episodes are actually perfect to watch if you feel like doing something online, or even when you have to do a mundane routine task. (Just make sure it is something that won’t go too wrong if you make a mistake!)

However doing this means that you need to watch it dubbed, unless you know Japanese. So sorry to all those subs only people out there.

The Melancholy of Haruhi Suzumiya is an anime about the adventures of Haruhi, a girl obsessed with the supernatural. Along with Kyon and the rest of the SOS Brigade (A club she created) they encounter many supernatural situations all of which Haruhi is blind to, as well as doing a bunch of other stuff that Haruhi makes them do just because she feels like it.

When I was watching this anime, there was one factor that bothered me constantly. One major flaw that made it very difficult to watch. This flaw was Haruhi Suzumiya herself. I have never felt this angered by a character on TV in my life. The way she treats people, and even her friends! It is atrocious! So I really struggled through this anime. It actually put me in a bad mood for the whole time I was watching it, I even had to take a break from it for a few weeks to calm down.

Excluding Haruhi, the rest of the show was wonderful. The characters were well done, complete with fun quirks and interesting backstories that resurface later in the show. The storyline is mostly interesting, although I have to warn you about the episode order. There are two different ways to watch the episodes. You can watch them in DVD order or broadcast order. You can decide which, however DVD order makes more sense.

The supernatural elements, in my opinion, were what really made this show great. Without them it would have been just another ordinary slice of life anime.

I really loved the action portions of this show. I really wanted to find out more about the backstory of most of the other characters, especially characters like Yuki Nagato.

Also you may notice that I have not included anything about the endless eight in this review. If you want to see my review of the endless eight or if you don’t know what it is, I have a post on it coming up soon.

The first thing I should mention is that despite its suspicious name, this show is not anything dirty.

This show is about Watanuki, who can see spirits. One day he stumbles into a mysterious shop that claims to grant wishes, and mostly deals with the supernatural. He ends up as an employee of the shop, granting wishes with the occasional help of his school friends.

I found that, for me, I enjoyed the last half of this show much more than I did the first half. I found that it started off being unnecessarily grim, focusing on and magnifying the ways that peoples minor everyday flaws can cause major problems in their lives, simply exacerbated by the supernatural. I found that their dwelling on such a thing did not make for a very enjoyable show. However, the second half of this show was top notch. They wandered off from their starting theme and began focusing more on supernatural creatures themselves and much more interesting stories about the people suffering because of supernatural phenomena which were not as clearly displaying the victims as people with self-inflicted problems that were blown out of proportion. I personally think that the characters in xxxholic weren’t actually very developed. Apart from Watanuki himself, they seemed to be fairly standard characters that could be summarised in one sentence.

I actually would have preferred to have seen a more defined storyline in this show. I commonly prefer the opposite, but I feel that it would have made it much more interesting and enjoyable in this case.

All in all the positives and the negatives of this show seemed to be evenly matched.

Case Closed is the English dubbed version of the first five seasons of Detective Conan.

It is about Jimmy Kudo, a fully-fledged detective. While on a date with his best friend Rachel he discovers some suspicious characters and follows them. They in turn find him and they force-feed him an untested poison. He wakes up as a seven year old. His adventures continue as he helps out Rachel’s father, a rather incompetent detective in solving his cases, under the name of Conan Edagawa.

The basic premise of this show was quite enjoyable, and while anything of this nature is bound to be repetitive to some degree I felt that the writers usually did a good job of handling it. However the ordinary murder mysteries did get tiring. I much preferred it when they differed from the murder mysteries, these were by far my favourites. Seeing Conan and his friends from the Junior Detective Squad was the best part of the show in my opinion. I would have liked to see more episodes concerning the “mysterious men in black” who caused him to revert to being a child in the first place. 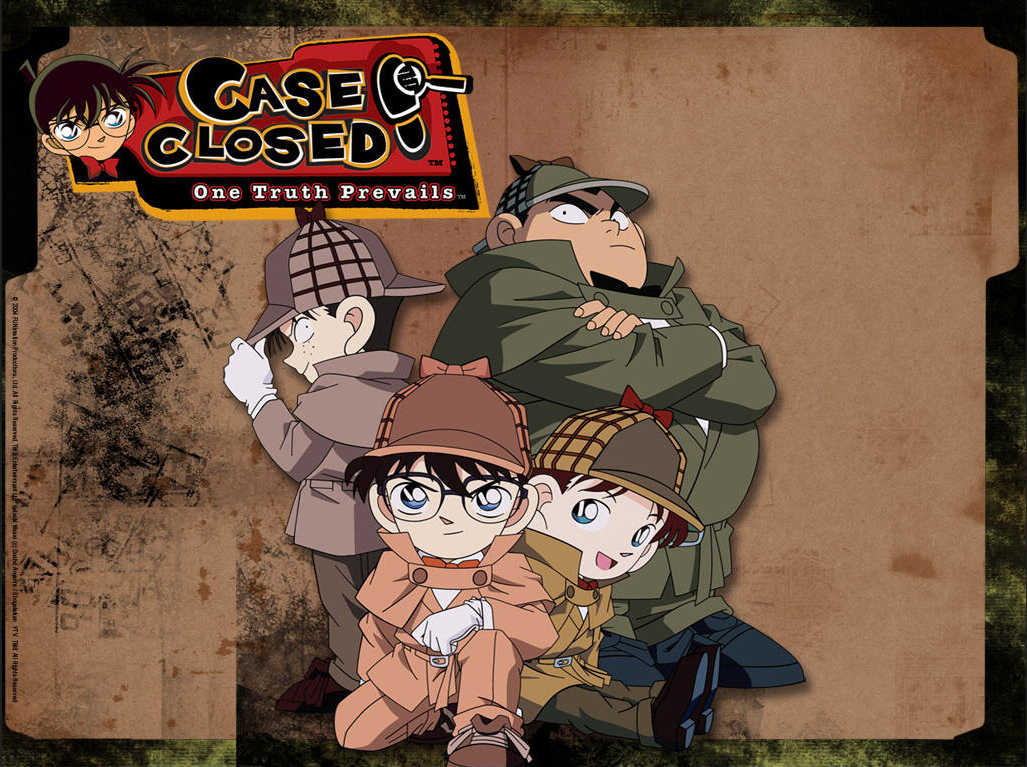 The characters stay fairly constant throughout this series, but we do see some interesting development with Conan himself as his personality becomes more childlike as the series goes on to match his body. They also make the most of the comedic potential of the interactions between Conan and Rachel, which helped to keep this show fresh.

Case Closed is fairly old though, which you have to keep in mind when watching. While it does not heavily affect the content of this show, it does show in the artwork.

This story is about Naruto, who is a young ninja in training. He is an orphan who is mostly shunned by the village because unbeknownst to him, he has the spirit of the nine tailed fox sealed inside of him. The same nine tailed fox that had previously almost massacred the village.

Naruto takes a very long time to really get going. It has a fairly strong first few episodes, but after that it becomes fairly dry for quite a number of episodes. However when it gets going it transitions into something truly deserving of all the praise it’s given. Naruto himself is an entertaining and inspiring character, however I found that I strongly disliked Sasuke and Sakura from the very beginning. I found them to be quite irritating and I felt that their presence in this series was much too prominent for my liking. The entirety of the multitude of secondary characters, were I felt all quite well written and interesting.

So in conclusion, Naruto is quite slow to start but I would certainly recommend it.

I don’t usually watch anime of the mech genre, however Code Geass really reaches beyond this genre.

This show focuses mostly on storyline, which is very intricate and deep and yet despite this it contains many action-packed fight scenes. These involve a fair bit of strategy involved to display Lelouch’s immense tactical skill.

Lelouch is a prince of Brittania, which has taken over a good deal of the world. This includes Japan, which has been given the title Area 11. When Lelouch was young his mother was killed and his sister lost the use of both her eyes and her legs. In the present, he attends a Brittanian school while masking his true identity. While travelling back to school, he gets caught up in the activities of a group of terrorists against his will. While his life is in danger, he meets a girl who saves him and grants him the power of “Geass”, which forces anyone to obey his commands one time. He then recruits the terrorists under the persona of “Zero”, and fights against the Brittanian Empire to create a world where his little sister Nunnally can be safe.

(Courtesy of the code geass wiki)

Frankly the plot of Code Geass is one that I consider epic. It is highly intricate, and also emotionally quite striking. For those who don’t like sad shows, I would not recommend this. However personally I found this to be one of the most enjoyable shows that I have seen.

The characters were mostly quite well developed, my only qualms were that I found that I rather disliked the character Suzaku. I also couldn’t stand Nina and found her to be an entirely irritating character.

I often don’t talk about animation styles in my review unless they are outstanding in one way or another, or fairly different from the norm and affect the viewing experience in some way. However there was one aspect of the animation that I found to be highly unusual and unique, and which I also found caused a great impact on me as the viewer. It was the way the facial expressions on characters were drawn, especially the way each character’s face would twist when facing an emotionally confronting moment. I found that this really helped to intensify those scenes and leave a lasting impression. The simple fact that I can picture these expressions clearly, months after I last saw them is simply incredible.